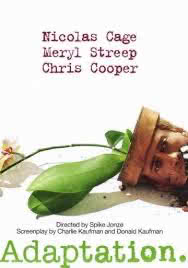 Ten weeks into quarantine, I am thinking a lot about the process of change. How will we get through the quarantine? What will life look like on the other side? Will I ever shake a colleague’s hand or hug a friend? I watch films for brief diversion and notice that scenes in restaurants, at parties or in crowds look out of place. I long for an outing to the movies or a chance to hear live music. I recall the date night in 2002 when my teenagers were babies and my husband and I enjoyed a rare evening at the movies to see Charlie Kauffman’s adaptationadaptation of Susan Orlean’s bestselling book “The Orchid Thief”“The Orchid Thief”. The film adapts a beautiful story about orchid hunting and creates a meta-montage about filmmaking, passion and the human ability to evolve.

AdaptationAdaptation tells two simultaneous stories. One is of Susan Orlean’s process of writing the book The Orchid Thief. Orlean is a quintessential New York intellectual immersed in an elitist bubble long before that term was in vogue. She is writing a story in The New Yorker about John Laroche, a toothless rebel who hunts rare orchids. Orlean mocks Laroche’s mannerisms while hosting sophisticated dinner parties while guests huddle alarmingly close together in her chic condo. But she finds herself obsessing over Laroche’s unrestrained passion and deliberate pursuit of floral perfection. In tandem, Kauffman tells a loosely autobiographical story of his personal struggle to adapt this magnificent book into a film. The screenwriter’s challenge is to capture a rapturous story about flowers and construct a film that reflects the simplicity of the book. Kauffman wants his screenplay adaptation to be about orchids — their life, their beauty, and what it means to cultivate a singular passion. This second plot is as colorful and arresting as the first, as the neurotic screenwriter struggles with severe writer’s block that mirrors Orlean’s struggles writing about Laroche. Meanwhile, pressure mounts from Hollywood to compromise Kauffman’s singular passion – artistic integrity – and make the film more gratuitous and marketable in order to give the viewers what they want.

The film’s title is also twofold. The plot traces the imaginative journey of the creative process of adapting a book into a film. The deeper meaning references the question of how humans and various life forms adjust and evolve in the face of environmental threats and challenges. The human capacity to change in the face of adversity and acquire new strengths and skills is central to this entertaining and memorable film.

John Laroche: You know why I like plants?
Susan Orlean: Nuh uh.
John Laroche: Because they’re so mutable. Adaptation is a profound process. Means you figure out how to thrive in the world.
Susan Orlean: [pause] Yeah but it’s easier for plants. I mean they have no memory. They just move on to whatever’s next. With a person though, adapting almost shameful. It’s like running away.”

As each character on the simultaneous plot tracks learns to adapt and evolve, viewers may discover that this film withstands the test of time and takes on new resonance in the face of our current universal challenge.