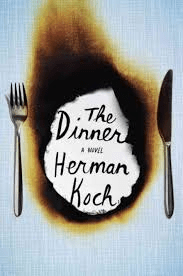 Beginning with an aperitif, and persisting through three courses and a digestif, Herman Koch’s “The Dinner” explores a variety of difficult questions about social responsibility, sibling rivalry, parenting, technology, pathology, intimacy and marriage.  This gripping story takes place in a restaurant in Holland and spans the course of a single meal.  While offering no answers to the complex questions raised, this book’s beauty is in the observations and its perspective, not the answers.  Koch’s keen exploration of the narrator’s inner emotional world is humorous, compelling and deeply disturbing.

“The Dinner” may frustrate readers who prefer to like at least some of a book’s primary characters.  However, for readers drawn to beautiful writing about ugly thoughts, pathological actions and the darkest dimensions of human nature, Koch’s novel is essential.

Surveying the men’s room of the methodically chic restaurant where “The Dinner” is consumed, Koch’s narrator, Paul, observes: “They were all consistent parts of a whole: consistent with the waitresses’ tight ponytails,  their black pinafores, the Art Deco lamp on the lectern, the organic meat, and the manager’s pinstripe suit – the only problem being that it was never exactly clear what that whole might boil down to.  It was sort of like certain designer glasses, glasses that add nothing to the personality of the person wearing them. On the contrary, they draw attention first and foremost to themselves: I am a pair of glasses, and don’t you ever forget it!”

While the characters themselves and the situations they face are extreme, the most interesting writing relates to the most common tensions and complexities of human nature.  As the meal unfolds, Koch challenges our assumptions about  appearance and reality.  The spoken and unspoken agreements that can seal or destroy marital intimacy are a haunting centerpiece of the narrative.  With each course, the details intensify and the storyteller’s perspective becomes  increasingly painful:

“Sometimes I couldn’t help but think …that [she] had merely signed up for something, for a life at the side of a successful politician, and that it would have been a waste of all the time she’d invested to stop now – the way you don’t put aside a bad book when you’re halfway through it.  You finish it reluctantly…Perhaps the ending would make up  for some of it.”

Readers may lose their appetite, and this could be Koch’s intention.  However, the experience of feeling trapped in a disappointing book is highly unlikely with this spellbinding, page-turning tale.

“The Dinner” is Koch’s 6th of 7 novels and won the Publieksprijs Prize in 2009.  Set in Holland, it has been published in twenty-five countries.  In 2012 Sam Garrett translated the book from Dutch.