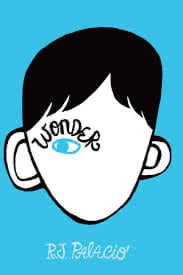 It’s not every day that I read a book written for middle schoolers; however, both of my daughters tore through Wonder with such intensity that I grew curious.  So, when their school principal sent out a notice suggesting that parents make time to read R. J. Palacio’s bestseller, I obliged.  Like my daughters, I could not put it down.

As a therapist, I hear a lot about isolation and the pain of rejection.  Breakups, divorce, abusive childhood histories, job loss and many other challenges can lead people to feel like an outcast.  Many describe feeling doomed by their circumstances and set apart from the life they imagine that others around them are enjoying with ease.  Wonder is a powerful tale about how hard it is to be different.   Adversity — in all its permutations — is isolating, and the sensation of rejection is much more common than most people realize.

On the surface, Wonder is the inspiring journey of August Pullman, a fifth grade boy who has been home schooled due to a combination of facial deformities and related medical issues.  The novel begins from August’s perspective:

Told from the perspective of various fifth graders and a few high schoolers, August’s journey unfolds as his parents decide that it is time for August to attend school and therefore face the world in spite of having a face that the world does not want to see.  Any parent whose child has suffered from a significant illness or setback will identify with the Pullman family’s pain, devotion and determination.  Palacio writes convincingly about  how hard it can be to be and feel different.  Middle school is tough no matter who you are, and Wonder captures the minds, heart and souls of middle schoolers with an ease and simplicity that is at times hilarious, moving, provocative and devastating.

Wonder is a worthwhile read for any parent (or grandparent or family member) who has witnessed the suffering of a child they love.  While we long to protect our children, sometimes the best way to protect them is to step back and allow independence.  With increased autonomy, children fall down and they hurt;  but they also surprise, evolve and inspire.    August’s experience in fifth grade demonstrates that, while there is cruelty in the world, there is even more kindness.  The middle school principal sets the tone for his students throughout the book and likewise explains:

“Kinder than necessary…What a marvelous line, isn’t it?  Kinder than necessary.  Because it’s not enough to be kind.  We should be kinder than needed.  Why I love that line, that concept, is that it reminds me that we carry with us, as human beings, not just the capacity to be kind, but the very choice of kindness.  And what does that mean?  How is it measured?  You can’t use a yardstick… It’s not like measuring how much you’ve grown in a year.  It’s not exactly quantifiable, is it?  … Such a simple thing kindness.  Such a simple thing.  A nice word of encouragement when needed.  An act of friendship.  A passing smile.”

Each page of Wonder is a testament to inner beauty.  August Pullman and his family and friends are everyday heroes who teach kindness, inspire compassion, and remind readers of the human capacity to overcome adversity.

Share on FacebookShare on TwitterShare on Linkedin
Posted in Books, Coming of Age, Family