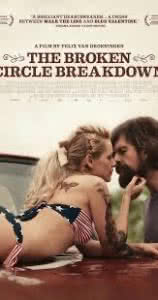 Many people reach out to a therapist when they are facing a crisis or a tragedy and therefore at their most vulnerable.  While conflicts and challenges related to religious faith are not at the forefront of my daily work as a clinician, I notice that when a crisis or tragedy relates to matters of life and death, conflicts about religious faith often come into play.  Sometimes a parent wants a grieving child to embrace a faith they never embraced.  Or a couple views their faith differently and while this worked fine in daily life, it becomes a terrible clash in the face of death.

2012 film The Broken Circle Breakdown was the Belgian entry for best foreign film at the 86th Academy Awards and received numerous recognitions and awards at international film festivals.  The story is groundbreaking in terms of its ability to portray the intricacies of how faith can ultimately become a deal breaker for any devoted couple facing tragedy.  The passion between Elise and Didier from the moment they meet is palpable.  Their chemistry inspires the bluegrass music they make together.  The captivating musical performances with their band function as the spiritual backdrop of this moving story.

When tragedy strikes, their dual track experience contrasts Elise’s heartfelt desire for faith and belief with Didier’s passionate but reasoned atheism.  Their honest, gritty dialogue does not offer any answers or solutions.  It simply demonstrates how contrasting religious beliefs or lack thereof may be tolerable or even insignificant in the day to day existence of a marriage.  However, if life hits you with unthinkable loss, differing views become much more complex and problematic.

Through couples therapy, many couples are helped by learning to be able to tolerate disagreement on certain matters.  For example, they may need to learn to accept that one is energized by socializing while the other finds it exhausting.  They may struggle with a spouse’s vegetarianism that evolves into a vegan or raw diet that clashes with the other.  They may need to navigate that one is much more innately physically active than the other.  These examples represent significant differences that couples can learn to manage and even use as an opportunity to grow.  In other words, learning to embrace each other’s differences helps a person build a sense of an independent self and to resist the pull to merge into one.

When it comes to matters of religion and faith, differing views — especially in a crisis — can be much harder to tolerate or to sustain.  The Broken Circle Breakdown is one of the most heart wrenching films ever made.  It is musically and aesthetically beautiful and Elise and Didier’s haunting story is unforgettable.  If you are struggling with someone important in your life regarding differing viewpoints about faith, this unsettling and important film may reflect and crystalize key elements of your personal experience.