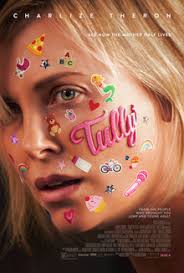 Hormones fluctuate throughout a woman’s pregnancy, and the immediate aftermath of delivery leads many mothers on the hormone-infused emotional roller coaster commonly known as post-partum depression. Having a baby is so uncivilized and consuming that many mothers do not realize that they are experiencing a delivery-induced depressive episode until it either subsides or reaches a crisis point. Therapy clients recalling the throes of post-partum depression describe sensations of emotional paralysis, energy depletion, intrusive thinking and fear.

Director, Jason Reitman, and writer Diablo Cody’s engaging 2018 film, Tully, paints a vivid and convincing portrait of how difficult it is to acknowledge a post-pregnancy depressive episode when it is happening. Tully is Reitman and Diablo’s third collaboration and fans of Juno and Young Adult will recognize the film’s sophisticated blend of humor and dramatic depth.

The film begins with its protagonist, Marlo, very pregnant with baby number three. Marlo’s yuppified, slightly annoying, but well-intended brother raises concern about how Marlo struggled emotionally following her last pregnancy. He and his glamorous wife want to help. So they offer to buy Marlo time with the night nurse that they have used in the past. Marlo and her low-key husband, Drew, appreciate this gesture, but they feel torn about whether to accept the gift.

Marlo does it all. She shuffles her eight-year-old daughter Sarah and her six-year-old son Jonah to and fro. She spends significant time and emotional energy caring for Jonah’s mysterious combination of sensory integration challenges. She advocates for Jonah at his school. It seems that he is only admitted and enrolled because his aunt and uncle (the night nurse advocates) are a major donors. She follows the doctors’ orders including an unusual daily skin combing ritual that seems as strained for Jonah as it is for Marlo. Marlo puts her family first. Charlize Theron gained plenty of weight to convincingly play Marlo – a stay at home mom who has completely let herself go.

Life seems to throw one challenge after another in Marlo’s way. But everything changes when the ethereal Tully arrives on the scene to help out with the newborn. The house is suddenly tidy. Celebratory cupcakes with detailed decorations are baked with joy. Life regains a modicum on long-lost sensuality and joy, and Marlo seems to reclaim her prior self. As viewers learn more about who Tully is, the complex dynamics of post-partum depression unfold with deliberation and intentionality. What results is a must-see film for tired moms and for the people who love them.