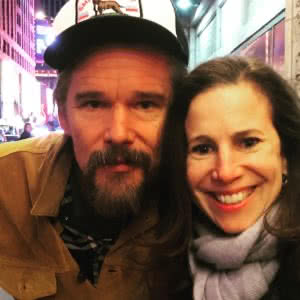 Most adult clients in therapy express a desire to improve their relationships. A critical facet of developing more meaningful adult bonds involves understanding formative childhood experiences with parents and siblings. It surprises me how often it surprises my therapy clients when we discuss complicated sibling roles and relations, and I voice my belief that all siblings consciously and unconsciously engage in competition. I’m surprised how often people beat themselves up for having feelings of resentment or anger toward siblings they love. We are socialized to view sibling rivalry as pathological when – in the context of an intimate family life – competition is a logical and understandable dimension of sibling dynamics.

Sam Shepard’s intense and honest play, True West, offers a raw exploration of brotherly competition. The play opens as Austin (Paul Dano) clicks away on his typewriter, diligently determined to meet his professional obligations as a writer, spouse and father who is housesitting for his mother while she takes a trip to Alaska. In struts his tipsy brutish brother Lee (Ethan Hawke) who taunts and teases Lee and tries to distract him from his work. Both actors melt into their roles as quintessential good cop and bad cop as Austin dutifully waters his mother’s plants and tries to whip Lee into shape. Lee just wants more liquor and the keys to Austin’s car, and Austin relents if only to get Lee out of the house as he prepares for an important meeting with a Saul who wants to sell Austin’s screenplay and further launch his career. Not surprisingly, Lee takes the car but returns in time to invade Austin’s business meeting as brotherly tension builds.

Shepard’s masterly presence is felt throughout these actor’s lively and active performances. Dano and Hawke’s chemistry is believable and admirable. The brothers’ journey reveals how ardently people tend to cling to their family roles. It is common to state a desire for change, but when possibilities for transformation present themselves, conscious and unconscious resistance to change can feel as ingrained as conscious and unconscious sibling rivalry. But rivalry and resistance to change do not mean that change is impossible, and neither represents a barrier to love.

I was thrilled to find last minute tickets to this past Sunday’s matinee. At the show’s conclusion, it was announced that members of the company would be staying to discuss the show. About a quarter of the audience stayed and shared the exciting surprise that it was Ethan Hawke and Gary Wilmes (Saul) who joined the audience to answer questions. A talented moderator shared that Shepard’s work conveys the belief that male violence in America connects with painful experiences of inadequacy and that the play was as much about how toxic masculinity sabotages our land, our culture and family relationships. Wilmes was humble and humorous and Hawke was brilliant and engaged. Hawke described how his lines and his character enter his subconscious and it was noticeable that his hands were covered in scabs from the sheer physicality of his performance. This unexpected window into the actors’ experience amplified an already extraordinary theatrical experience.