The Short and Tragic Life of Robert Peace

The Short and Tragic Life of Robert Peace 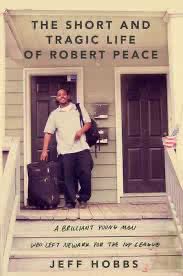 College life is under a microscope of of significant recent media attention.  The massive promotion surrounding Frank Bruni’s new book “Where You Go Is Not Who You’ll Be:  An Antidote to the College Admissions Mania” makes a convincing case that an Ivy League education is not necessarily in the best interest of even the most qualified of applicants.  In his March 13 Op-Ed column “How to Survive the College Admissions Madness” Bruni summarizes the gist of his book:

“…For too many parents and their children, acceptance by an elite institution isn’t just another challenge, just another goal.  A yes or no from Amherst or the University of Virginia or the University of Chicago is seen as the conclusive measure of a young person’s worth, an incontestable harbinger of the accomplishments or disappointments to come.  Winner or loser.  This is when the judgment is made.  This is the great, brutal culling.  What madness.  And what nonsense.”

Bruni gives several examples of students rejected by the Ivy Leagues who go on to thrive at lesser known schools.  He points out that of the top ten corporations listed in the Fortune 500, only one of the chief executives attended an Ivy League college.

Meanwhile, The New York Times reported this week that at the prestigious Wesleyan University, ten students and two guests  were hospitalized after tripping on a contaminated batch of the psychedelic drug Molly.  At least one student was not breathing, and Wesleyan’s Vice President sent out a campus wide email in desperation, urging students to check on their friends.  The unthinkable pressure was on to make sure their compromised student body was, indeed, breathing.  Five students have been arrested and suspended.

In another top emailed story in this week’s New York Times, “Alcohol or Marijuana?  A Pediatrician Faces the Question” , Dr. Aaron E. Carroll attempts to determine which is the more palatable of these two substances that many if not most college students will presumably use at some point during college.  While Dr. Carroll makes it clear he would prefer that his kids try neither marijuana nor alcohol, he considers a breadth of current research to come down slightly in favor of pot.  The information he cites is interesting, indeed:

“The National Council on Alcoholism and Drug Dependence reports that alcohol use is a factor in 40 percent of all violent crimes in the United States, including 37 percent of rapes and 27 percent of aggravated assaults.  No such association has been found among marijuana users.  Although there are studies that can link marijuana to crime, it’s almost all centered on its illegal distribution.”

One problem, however, is that some college students who smoke marijuana regularly will end up dealing.  The Short and Tragic Life of Robert Peace, Jeff Hobb’s narrative non-fictional account of his college roommate’s struggle with marijuana use, demonstrates that even if fewer addictions and fewer crimes are associated with marijuana use, addictions do happen, and sustained use can indeed lead to violent crimes and even death.  Robert Peace’s true life story offers a fitting summation and reflection of the breadth of current media scrutiny of elite college life.

The spoiler title makes the book emotionally difficult to read.  Readers cannot help but feel invested in and inspired by the young, brilliant Robert Peace.  Robert is a gifted, intense, huge-hearted boy from East Orange, New Jersey whose mother, Jacqueline, goes to extraordinary lengths to provide her son the best education available.  In spite of his father’s incarceration for murder charges, Robert emerges as a leader among his peers, a talented athlete and a standout student possessing a brilliant mind.  Robert consistently refers to his mother as “his heart”.  Astoundingly, his ultimate downturn takes place when he receives a full scholarship to Yale and he and his mother feel he must take advantage of this opportunity in spite of various acceptances to other schools.  Overwhelmed and offended by the excess and privilege of his environment, Robert copes through near constant marijuana use and too many trips to his old neighborhood.  Hobbs observes his Yale freshman peers and writhes: “It was as if all of these kids had spent so long working so hard to get here that the reaction to actually being here was to become idiots.”  Robert becomes psychologically and developmentally stuck, and graduates lacking the direction and drive that was the hallmark of his childhood.

Admittedly, the book is at least a hundred pages too long, but his college roommate and friend, author Jeff Hobbs, uses an impressive compilation of research and interviews to recreate Robert’s complicated, chilling and tragic life history.  While an elite education holds obvious appeal, Robert’s life trajectory proves that sometimes even the most exceptional, brilliant students may be far better off in a lesser known, and ultimately more down-to-earth school.

What this book does best is demonstrate the human tendency to repeat the most painful elements of one’s past.  Robert’s ever-present longing to have more of his father than would ever be possible leads to self-destructive behavior that maddens and confuses those who try to get close to him.  Yale fails miserably with respect to becoming a salvation or meaningful community experience.  Readers are left convinced that a lesser known, more structured college environment, ideally farther from East Orange and with less access to drugs and less excess among his peers might have helped Robert take full advantage of his rare intellectual gifts.

For students who are hearing from colleges and preparing for this exciting new life chapter, The Short and Tragic Life of Robert Peace is a worthwhile and cautionary shared family reading experience that offers wise advice regarding the relationship between campus life and substance use.  Furthermore, this memorable non fictional narrative proves beyond a doubt that what matters most is the experience that a particular college will offer a particular student.  If a dedicated student is disappointed by rejections from the Ivy Leagues, read this book and consider that this may be a blessing in disguise.

Share on FacebookShare on TwitterShare on Linkedin
Posted in Books, Fathers, Mothers, Substance Use, Trauma