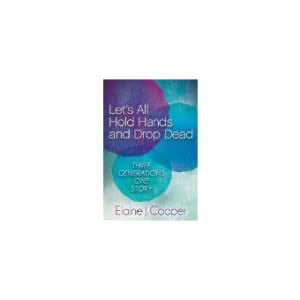 Group therapy is one of the most difficult forms of therapy, but it is also perhaps the most effective.  World renowned group therapist Elaine J. Cooper’s new book, Let’s All Hold Hands and Drop Dead; Three Generations One Story, is part autobiography, part biography and part guide for clinicians in the field.  But it is also meaningful and useful self help for those who are struggling to build intimate relationships.

Cooper writes convincingly about how trauma can be passed down from one generation to the next — many times without direct recognition or awareness:

“The social unconscious, also called the generational unconscious, has to do with a buried memory from past generations of trauma, especially one imposed by our fellow human beings.  It could be the Missing in Argentina or the pogroms in Russia and Ukraine.  The list is endless, and it can be found in most human societies.  These events might have occurred one or two generations before, and we are unaware that children bear their suffering, since they themselves rarely speak of their past, if at all.  The children pick up their parents’ pain unconsciously.”

Cooper goes on to trace how her grandparents’ and parents’ traumatic histories shape the lives of her two brothers and herself.  Her descriptions are so raw — at times embarrassingly so — that readers may cringe at the depth of the author’s honesty and abandon.  She alternates between her father’s childhood story, her own, and the parallel experience of a composite psychotherapy group in which the members reflect elements of each other’s experience and also of the therapists’ own internal conflicts.

Cooper summarizes the impact of intergenerational patterns in which conflicts can take the form of family legacies.  Her description captures the experience of many therapy clients:

“All of our brains are wired to love and hate…In the first generations (my parents’), love and hate were unrestrained.  They were acted out courageously and violently; there were no controls.  In the second generation (my siblings’ and mine), my brothers and I were affected by the violence and heroism of the previous generation, but we had no conscious awareness of it; we were simply enveloped by it.  In the third (my therapy groups’), members know that extreme hate and love exist, and they are extremely frightened by both.  As a result, they keep these emotions bound in knots inside themselves and are not able to have healthy intimate relationships in which love and hate take constructive forms.  They experience outbursts of anger.  They become symptomatic, developing eating disorders, depression and anxiety.”

As the group process unfolds, what results is a convincing case for this challenging but extremely effective mode of therapy:

“People come for treatment when they are in emotional pain or know that they are not making the most of their lives.  Almost all emotional conflicts affect our interpersonal relationships.  Thus as people spontaneously interact with one another, they get stuck at certain points.  In group therapy the blockage becomes clear; by relating with one another, members see the interpersonal changes they need to make.  [This] process of change involves dealing with someone in the group in a new way.  The therapy group become a laboratory in which people practice and experiment.  For this reason friendships between members outside the therapy meeting are discouraged.  If such alliances form, members might not take the necessary risks within the group.  Group therapy is a much less protected form of therapy than individual therapy – as a result, it is more effective.”

Having had the privilege of participating in a three-year AGPA sponsored Continuous Group Institute led by Elaine J. Cooper, and now having had the captivating experience of reading her psychologically sophisticated and memorable book, I urge those who want to work on the way they relate with others on an intimate level to read this book and also to consider participating in some form of group therapy.

NOTE:  You may be wondering:  “What’s with the edgy provocative title?”  This phrase functions as a reference to the author’s brother and how his parents’ and grandparents’ traumatic history impact his life experience.  Cooper later makes the meaningful correlation to group therapy realizing by simply changing her brother’s motto to “Let’s All Hold Hands OR Drop Dead” a tag line is created that communicates the potentially life saving aspect of group therapy.

Share on FacebookShare on TwitterShare on Linkedin
Posted in Books, Depression, Therapy, Trauma