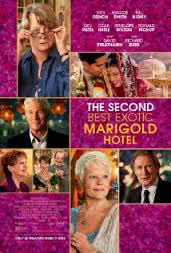 We are socialized to imagine that getting engaged and planning a wedding will be a magical whirlwind fulfilling life-long fantasies of white lace, multi-level tiered cakes and happy-ever-after.  Any couples therapist with experience in pre-marital counseling will tell you otherwise.  One of the many things that The Second Best Exotic Marigold Hotel, the follow-up film to the beloved first installment, gets right is its utter rejection of this misguided view of what an engagement is really all about.

In the first film, we root for Sonny and Sunaina as they navigate familial disapproval and grow as individuals while nurturing their passionate romance.  Now, as Sonny hopes to expand professionally with The Second Best Exotic Marigold Hotel, we see that becoming engaged and trying to plan for his future has not necessarily brought out the best in him.  He seems anxious, distracted and at times grossly unprofessional.  This out-of-the-box hotelier seems to have lost his groove.  Meanwhile, Sunaina gets way too wrapped up in the wedding details and excessively flirtatious with her dashing dance partner.  From a psychological perspective, one might view their behavior as an expression of unconscious anxiety about what marriage is all about.

As the plot unfolds, the film’s multiple storylines work together as a compelling exploration of love, commitment and the question of what it takes to make the romance last.  Such questions often come up in the process of pre-marital counseling, and I have been encouraging clients to watch both the First AND the Second Best Exotic Marigold Hotel to help demonstrate that engagements are usually much more stressful and complicated than popular culture would have us believe.

Every relationship is different, and some signs of trouble may not be optimal from a therapist’s perspective but may truly work for a particular couple.  For example, if one person is an admitted workaholic, but the other person genuinely enjoys time to themselves, the synergy may work well.  Couples tend to choose one another for profound psychological reasons that often hold the potential to either bring them together or tear them apart.  The clever trick is healthy communication especially in times of conflict.  This ultimately comes down to an ability to be engaged and intimate with the other person, but still experience one’s self as a truly separate self.   Such individuals are able compromise, admit their shortcomings, offer genuine apologies, and sincerely prioritize their partner’s needs and desires.  They can therefore love their spouse for who they are rather than who they want them to be.

The biggest red flag heading into marriage occurs when one or both partners indulge the common fantasy that the act of marrying will fix a particular problem or disagreement.  Since most couples tend to fight about the same things and face the same challenges throughout the arc of their relationship, it is optimal to head into marriage with an awareness of the relationship’s strengths and weaknesses.  In the age of reality shows about over the top lifestyles and fairytale weddings, it is so easy to get caught up in a whirlwind of wedding planning and imagine, for example, that a partner who says they do not want children will change their mind once they become domesticated.  Another common fantasy is that a partner who drinks too much will change this behavior once they are settled.  Such unrealistic fantasies ironically prevent couples for addressing difficult issues and thus become obstacles to intimacy and martial fulfillment.

These two films cover much more than the romantic tale of Sonny and Sunaina.  If fact, the most important myth debunked by the film is that once you are old you are all washed up.  Director John Madden embraces and celebrates life’s later chapters and challenges viewers to rethink stereotypes about what it means to age.  Thinking about engagement AND older age in a new light is especially beneficial to couples who are planning to marry, as they are immersed in a psychologically rich albeit emotionally complex time.  If you are recently engaged or contemplating engagement, take the time to check out these inspiring and informative films.