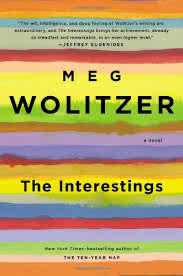 Meg Wolitzer’s page-turning novel traces the experiences and relationships of six friends who meet as teenagers at Spirit-in-the-Woods arts camp in the summer of 1974.  Wolitzer captures these glorious fifteen and sixteen year old souls with their musings, quirks, and complexities.  Readers will relish their adolescent ability to be intensely vulnerable and real with each other:

“A first kiss, Jules had thought, was supposed to magnetize you to the other person; the magnet and the metal were meant to fuse and melt on contact into a sizzling brew of silver and red.  But this kiss had done nothing like that.  Jules would have liked to tell Ash about it now.  She recognized that that is how friendships begin: one person reveals a moment of strangeness, and the other person decides just to listen and not exploit it.”

The Interestings is about talent, creativity, and the yearning to feel relevant.  As these like-minded artists come of age, they struggle with choices about honesty, love and artistic integrity:

“Some actors had resolve but no talent; others were all talent but breakable, and the world had to discover them before they shrank back and disappeared….You judged people not on their success – almost no one they knew was successful at age twenty-two, and no one had a nice apartment, owned anything of value, dressed in expensive clothes, or had any interest in making money – but on their appeal.  The time period between the ages of roughly, twenty to thirty was often amazingly fertile.  Great work might get done during this ten-year slice of time.  Just out of college, they were gearing up, ambitious but not in a calculating way, but simply eager, not yet tired.”

Wolitzer’s tale is also about the human connection.  She convincingly reveals the inner emotional world of adults and their longing to find meaningful work and sustain intimacy.  Their journey emphasizes how family secrets — even well-intended ones – erode intimacy, and how destructive it is to obsess about the life you envy rather than engage in the life you create.  As the circle of friends (who name themselves The Interestings) enter the 1980s, the middle of the novel occasionally reads as if Wolitzer may be trying to cover too much ground by incorporating every element of the zeitgeist of the era, ranging from AIDS to cilantro to the Moonies.  Nevertheless, her complex portrait of these flawed and engaging characters traces a memorable narrative that makes for excellent, engaging reading.