The Index of Self Destructive Acts

The Index of Self Destructive Acts 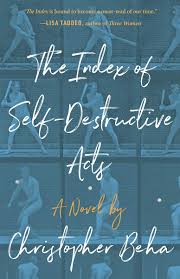 As Election Day nears, predictions are everywhere. Pundits posture early and often, citing polls, historical data and opinions. The urge to predict the future feels palpable. Most of my therapy clients (and my family and friends) express quarantine fatigue and a desire to fast-forward and discover the election’s outcome. Maybe the urge to predict the future is amplified because the stakes are higher during a global pandemic. Maybe the shock value of Trump’s 2016 win leaves many voters more interested in discerning clues that may linger beneath the data in plain view.

For voters who notice difficulty stepping away from the news, Chistopher Beha’s new novel, The Index of Self-Destructive Acts, is an absorbing diversion that fits the moment. The index itself is a real-life brainchild of the nerdy baseball statistics guru Bill James. The term references the total number of theoretically avoidable mistakes made by a team in each game. With respect to the plot, this concept symbolizes the rise in data analysis’ ability to predict outcomes – in sports and in politics. It also represents the conscious and unconscious human tendency to self-sabotage.

When we first meet protagonist Sam Waxworth, he is moving to Manhattan from Madison, Wisconsin to capitalize on his skills as a young wunderkind data dude and has taken a new job at a prestigious but struggling magazine, The Interviewer. It is 2008, post market crash, and Sam recently morphed his baseball prediction talent into perfect predictions of all of the 2008 campaign races. His number crunching success skyrockets him to fame as the pundit of the moment. The Interviewer needs a viral youth like Sam if they have any chance of surviving in the digital age, and Sam needs The Interviewer to become the legitimate success he envisions as destiny. Sam’s first assignment is to interview Frank Doyle, a legendary, now disgraced journalist and fellow baseball enthusiast who was cancelled (before that was really a thing) when he made racist remarks about President Obama during a televised interview at a Mets game.

In perhaps the most absorbing and character driven novel this year, Sam and the characters who animate his journey rationalize a litany of self-destructive acts that defy sensible explanation but seem believable in the moment. Sam’s wife Lucy follows Sam from Madison not long after his arrival and represents the character who makes relatively few self-destructive errors. Sam’s betrayal of Lucy is a drawn out spoiler, but Lucy’s supposed betrayal of Sam involves her clandestine decision to consult a psychic. In Sam’s data driven world, allowing a psychic to enter their marital equation is akin to covertly poisoning their drinking water. Psychics don’t just ignore quantifiable data, they mock it. From Sam’s perspective, Lucy’s flirtation with the data-less clairvoyance is a soul crushing transgression. But Lucy’s world is crashing down around her and she is losing all control. As she struggles to understand her present and envision her future, she finds remarkable solace in this secret rebellion that defies all reason and tangible analysis.

Lucy’s silent rebellion functions as her ultimate salvation. I cannot help but wonder if women everywhere may have secrets of their own that they may take to the ballot box to offer surprises in the coming days that reflect this novel’s trajectory. Even the best data cannot predict the private choices made in moments of isolation and desperation.