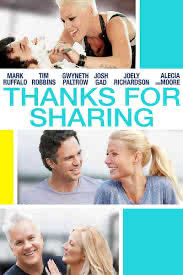 Romantic relationships are complicated, intense, beautiful entities that can be challenging to nurture and sustain.  Today’s persistent emphasis on high-speed solutions, high-tech communications, and ubiquitous social networking can compromise the development of a simple, organic union between two like-minded people hoping to find love.  For those who struggle with sexual addiction, a long-term committed relationship is even harder to contemplate or sustain.

Thanks for Sharing, a 2013 film directed by Stuart Blumberg and starring Mark Ruffalo, Tim Robbins, Gwyneth Paltrow and Pink (yes, Pink!), offers a thoughtful window into the isolation and desperation associated with sexual addiction.  More importantly, the film’s portrayal of the recovery process is at once realistic, engaging and endearing.  The film resists gratuitous solutions, takes on a difficult topic, and tells an entertaining, thought-provoking and challenging story.

Pink steals the show as Dede, a spunky, sweet sex addict in recovery whose friendship with Neil (Josh Gad) is the unexpected gem of an otherwise worthwhile film.   As Dede and the goofy and at times grotesque Neil support each other through their recovery, this secondary story line compliments the greater plot .

Thanks for Sharing communicates some key points about sexual addiction:

Sustained recovery necessitates dramatic measures:
Mark Ruffalo stars in the film as Adam whose addiction is so fierce he must live without computers and televisions and he even requests that televisions be removed from his hotel room when he is traveling for business.  It is quite common for addicts to believe that they can conquer their addictions while continuing the exposure to their triggers, but this is often impossible.  For at least the first few years of recovery, alcoholics should not be around alcohol and should have absolutely no alcohol in their home.  Recovering from sexual addiction, or any addiction, requires these same precautions and commitments.

Relapse is common:
Even among those who are willing to attend multiple meetings, relapse is a common reality of addiction.  It is not uncommon for those resisting recovery to attend meetings and socialize with other addicts in a manner that can compromise recovery.  Thanks for Sharing tackles the issue of relapse in a thoughtful and realistic manner.  In spite of the possibility of relapse, those who stick with intense treatment are the ones who are most likely to conquer their addiction.

If you think you may have a sexual addiction, viewing the film Thanks for Sharing (available to stream on Netflx) could become a significant step in the long road to recovery.

Share on FacebookShare on TwitterShare on Linkedin
Posted in Dating, Films, Sex, Substance Use, Therapy