The End of the Tour

The End of the Tour 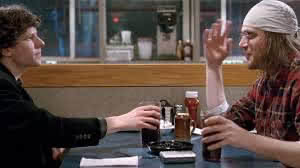 James Ponsoldt’s 2015 film, The End of the Tour, (recently released on cable) is easily relatable for therapists.  Perhaps especially so for therapists practicing in areas like DC full of high achievers.  Opening in 2008 with the news that acclaimed author David Foster Wallace has suicided, lesser acclaimed writer, David Lipsky, begins listening to old tape recordings from an interview Lipsky conducted in Bloomington Illinois over a few days back in 1996 following the flurry of publicity around the publication of Wallace’s epic novel “Infinite Jest”.  Lipsky had suggested a profile of Wallace to his dubious editor at Rolling Stone, and the assignment serves as Lipsky’s attempt to get inside the head of the writer he wishes he could be.  Lipksy’s own novel, “The Art Fair”, about maternal attachment and the Manhattan art scene, was also published at around the same time as “Infinite Jest” and appears to have gone unnoticed by readers and critics alike.

As the two writers converse, viewers glance the inner world of Wallace’s depression — an inner world that might otherwise be reserved for the eyes and ears of therapists whose professional mission is to understand and treat such conditions.  What unfolds is at once entertaining, enlightening, hilarious and tragically sad.

Lipsky wants Wallace to like him.  Wallace wants to not come across in the profile as a self-satisfied douchebag.  Most of the film spans an ongoing, intense, at times awkward, at times inspired conversation between the two as they drive around, hang out, flirt with some girls, eat junk food, and experience the wrap-up phase of Wallace’s book tour.  Lipsky wishes to possess Wallace’s literary genius.  Wallace wishes Lipsky could appreciate the internal beast of depression and how much it weighs him down.  Lipsky asks why Wallace always wears a bandana, as he obviously longs to be a cool enough pop cultural icon to sport such a look.  Wallace takes deep offense to the idea that the choice is a fashion statement.  Quite the contrary, Wallace explains that he is prone to intense sweating and that he finds that a bandana helps him quell a constant fear that his head will explode.

This engaging, memorable conversation is not one that I would recommend for individuals battling depression.  However, for friends or loved ones of a severely depressed individual, The End of the Tour could help shed some insight and be worthwhile therapeutic viewing.  Tragically, this brilliant literary voice lost a battle with depression.  Ponsoldt’s important film may ask more questions than it answers, but the questions posed about depression are those that our society all too often hesitates to ask.

Share on FacebookShare on TwitterShare on Linkedin
Posted in Depression, Films, Work & Career