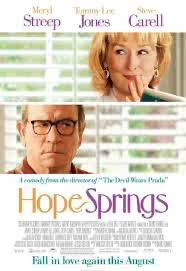 Cinematic portrayals of couples therapy are tough to acheive.  While television series such as In Treatment and The Sopranos have done a wonderful job of conveying what its like to experience individual psychotherapy, a realistic portrayal is much harder to achieve in a film. And even harder to achieve with respect to couples.  The groundbreaking film Hope Springs (available on DVD) achieves an incredibly thoughtful and realistic portrayal of this process.

Why is it so hard to make a good film about couples therapy? Because therapy is hard work and change is awkward and uncomfortable. This brand of work and discomfort is incredibly difficult to convey on an artistic level within cinematic time constraints. Herein lies something truly special and psychologically unusual about Hope Springs as a film, and Kay (Meryl Streep) and Arnold (Tommy Lee Jones) as a couple. Through superb writing (Vanessa Taylor), masterful direction (David Frankel) and world class acting, we see just how weird it can feel to try do something different. Even if two people adore one another, as Kay and Arnold clearly do, trying to break out of long-standing marital patterns is no easy feat. If two people have settled into a distant, disconnected marriage, they are both likely to get used to their separate lives (and their separate bedrooms). Whether one or both partners desire the change, couples are bound to cringe at various points in the therapeutic process. The sheer awkwardness of trying to break out of relational dynamics that one has grown used to (such as sleeping in separate beds or not touching each other) can make couples want to give up all together. This is a phenomenon therapists frequently call “resistance”.

Therapists will say that sometimes clients need to get worse before they get better, and Hope Springs takes us down that road beautifully. Steve Carell nails his role as a couples therapist. Dr. Bernie Feld’s earnest facial expressions, calm voice, groovy but conservative dress and and hokey but relevant cliches are perfect. For example, he tells Kay and Arnold that he metaphorically likens therapy to the process of correcting a deviated septum — the nose needs to be completely broken in order to be fixed. When Kay and Arnold are mutually humiliated after their very best effort to rekindle romance comes close but ultimately fails miserably, Bernie eloquently put thins into perspective.  He reminds the dejected couple that they made it all the way to the five yard line during the evening in question, and that they were stuck way out in the stadium’s parking lot when they first began.

These cliches may seem hokey and hilarious, but they are clinically sound and relevant to how daunting it can feel when two people are  trying to save their marriage. Personally, I tend to view the process of making a significant change a bit like learning how to drive a car: at first there is so much to think about — gas, breaks, speed, rear-view-mirror, directions — and driving can feel stressful, awkward and uncomfortable. Over time, it is not as if we stop thinking about all of the necessary skills we must use while driving, instead, we become experienced and comfortable with what we are doing. We learn to think about driving without noticing that we are thinking about it, and so it feels much more natural.

I have always been a big believer in biblio-therapy and cinema therapy. Sometimes reading a book or watching a film can help a client make personal insights that can speed up the therapeutic process. This film is so real and genuine and funny and heartbreaking and inspiring, and it surely has the potential to help save marriages. I am thrilled that I can add Hope Springs to my reservoir of recommendations.