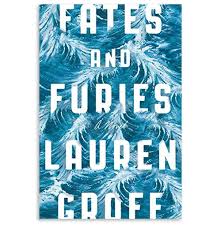 When couples in therapy describe their relationship challenges, the delicate act of balancing separateness and togetherness surfaces as a recurring theme.  Lauren Groff’s provocative 2015 novel, Fates and Furies, injects this theme with steroids and invites readers into a provocative narrative exploring the internal emotional worlds of two married individuals who have blended into one.  They function in unison, but their experience of the marriage shares little common ground.  Lotto and Mathilde meet at a party just before their graduation from Vassar.  An effervescent, confident Lotto sights an odd, eccentric Mathilde across the room:

“His past was gone.  He fell to his knees and took Mathilde’s hands to press them on his heart.  He shouted up at her, “Marry me!”  She threw back her head, baring her white snaky neck, and laughed and said something, her voice drowned.  Lotto read those gorgeous lips as saying “Yes.”

Granted, Lotto was exceptionally high on alcohol and high on life following his lead performance in Vassar’s production of Hamlet early in the evening.  The young, golden couple marry two weeks later:

“Between his skin and hers, there was the smallest of spaces, barely enough for air, for this slick of sweat now chilling.  Even still, a third person, their marriage, had slid in.”

Lotto’s version of their life, love and marriage comprises Fates, the first half of Groff’s tale.  The latter half of the novel, Furies, is told through Mathilde’s perspective.  Like much of their marital trajectory, their first moments of acquaintance are experienced quite differently by Mathilde:

“In the story he told of this – spun at so many parties, so many dinners, she listening with her smile, her head cocked, laughing slightly – she said “Sure.”  She never correcting him, not once.  Why not let him live with this illusion?  It made him happy.  She loved making him happy.  Sure!  It wasn’t true… but it did no harm.”

Lotto’s privilege and success is fated through a childhood upbringing surrounded by family who insist he is special and slotted for greatness.  Mathilde’s hidden, raging fury is rooted in her twisted, tragic past.  Fates and Furies, interestingly, is less about marriage and more about how perception and memory can shift and slide to create contrasting meanings and experiences.  This provocative tale is also about how messages communicated by parents during childhood are formative and shape both personality and internal experience.   Lotto’s inflated sense of self allows his utter failure to learn more about Mathilde’s past:

“Love that had begun so powerfully in the body has spread luxuriantly into everything.  They had been together for five weeks… Still strange to each other.  Yesterday, he’d found she was allergic to sushi.  This morning….it struck him that she had no family at all…Now she had only him.  It moved him to know that for her he was everything.”

Mathilde’s lacking of a grounded, sustained sense of individual self blends beautifully with Lotto’s grandiosity and allows their love to churn amidst multiple layers of secrecy:

“Great swaths of her life were white space to her husband.  What she did not tell him balanced neatly with what she did.  Still, there are untruths made of words and untruths made of silences, and Mathilde had only ever lied to Lotto in what she never said.”

The plot occasionally feels overstuffed or forced, and the extreme elements of Lotto’s and Mathilde’s personalities make them less believable as characters.  Nevertheless, Groff’s ability to capture the internal psychological experience of two married people and her ability to connect childhood tragedy to adult personality create a captivating, thought provoking adventure.

Share on FacebookShare on TwitterShare on Linkedin
Posted in Books, Family Secrets, Marriage