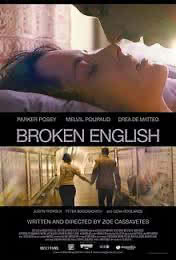 When you are single, it can seem like absolutely everyone is in a relationship.  It can also seem like everyone expects you to find a relationship.  People can say and do the most hurtful and insensitive things to convey the message that you are somehow less than those who are part of a couple.  What should be a time of independence and personal growth can feel like a period of intense isolation and pain.  Being single is especially challenging if you are simultaneously grieving a significant loss.

Broken English, an understated film starring Parker Posey, is among the most intense and thoughtful portrayals of the urban life of a single woman.  Writer and director Zoe Cassavetes, the daughter of the late, great, John Cassavetes, uses a cinematic style similar to her father’s that allows her characters to seem incredibly real.  This film does not set out to entertain.  Instead, through a series of simple and sometimes painful conversations and experiences, viewers are given an honest look at the struggle to exist as a single thirty-something woman grieving the death of her father.  Nora battles severe anxiety and her solitary efforts to manage stress are as moving as her efforts when among others.  Some aspects of the film are so unsettling that you may find it difficult to watch and more useful to reflect upon and appreciate once the film is over.

Nora (Posey) oversees guest relations in a wanna-be chic boutique hotel.  The film opens as she anxiously dresses and then attends her best friend Audrey’s anniversary party.  Nora braces herself for Audrey’s husband’s earnest toast:  “It’s not often that you get a chance to meet the girl of your dreams much less got to marry her…I want to take a moment to thank Nora Wilder who introduced us.  Without her there wouldn’t be an us.”

As if this toast weren’t enough, Nora’s mother (played brilliantly by Cassavetes’ real-life mother Gena Rowlands) is also at the party and remarks: “I wish you would have married Mark.  He was always crazy about you; you know that.  It would have been perfect…He’s handsome, he’s successful, he has a terrific trust fund.  Audrey is never going to have to work again….You never should have introduced them…I’m just saying she knew a good thing when she saw it.  The good ones get snapped up so quickly at your age.”

Perhaps part of what allows the film to seem so accessible relates to the backstory: the director did lose her father, and the director’s real-life mother is playing the mother of the film’s protagonist.  The conversations between mother and daughter on the topics of love, loss and relationships are at once maddening, engaging and heartbreaking.  It is as if you have walked into this family’s real life in the aftermath of John Cassavetes’ death.

Zoe Cassavetes understands and beautifully conveys two things that make this film worthwhile viewing for anyone who is single and struggling.  First: the idea that everyone else is in a relationship and therefore happy is a significant, misguided illusion.  Second (and most important): in order to find a happy, healthy relationship, you must find happiness in yourself.  People say this all of the time and it can easily sound cliche.  This film plays out this truth out in brutal detail.  When you are unhappy in your independent life, you cannot possibly bring someone else into a happy, healthy, functioning union.  If you are single and struggling, Nora’s gritty, gutsy path could be inspiring and even cathartic.

Share on FacebookShare on TwitterShare on Linkedin
Posted in Dating, Films, Grief