All the Money in the World

All the Money in the World 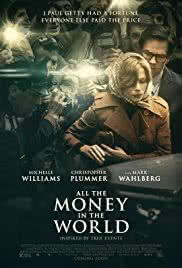 Clients in therapy describe a variety of life stressors. In a place as expensive as Washington, D.C., it is understandable that money surfaces as a frequent source of tension and anxiety. Therapy clients describe the sensation of feeling like there’s never enough money to create a sense of financial security. Interestingly, some therapy clients notice that once they finally attain financial accomplishments, relational satisfaction plummets. Sometimes the process of therapy centers on a desire to recalibrate and discover new, less materially focused priorities.

Ridley Scott’s captivating thriller All the Money in the World chronicles the infamous kidnapping of John Paul Getty III and takes viewers on an engrossing journey packed full of villains, chaos, violence and suspense. The dual backstories of this 1973 kidnapping’s place in history and the 2017 scandal leading to Kevin Spacey’s post-filming expulsion due to sexual misconduct allegations work together to concoct energy and intrigue throughout sixteen year old Getty’s harrowing journey.

The film’s therapeutic value is somewhat obvious. Billionaire Jean Paul Getty refuses to pay his grandson’s kidnappers and insists he cannot afford the ransom. He allows his grandson to suffer unthinkable trauma as he counts his money in isolation. His son descends into a drug-induced stupor. Family wealth in this instance obviously creates much greater harm than good. Despite existing as the richest individual on earth, Jean Paul Getty remains unable to feel he has enough. He insists he wants more.

Working as a therapist in one of the most expensive cities in the world, it is unrealistic to imagine that the financial anxieties my clients experience will ever disappear. A healthy dose of anxiety is necessary in order to perform. However, I’ve noticed that those who watch All the Money in the World walk out with a healthier financial perspective which frees up emotional energy for more meaningful pursuits.