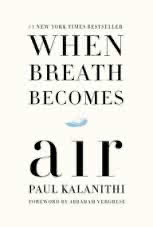 Some books are so special, articulate, and profound that the pages read as if the book has written itself.  Paul Kalanithi’s When Breath Becomes Air leashes words together in poetic combinations that are both a revelation but also obvious.  Sentences seem as if they were waiting to be placed beside each other with remarkable beauty and clarity.  When Breath Becomes Air placed at the top of the New York Times Bestseller list, and this fitting achievement is an appropriate legacy for a gifted writer who did not live to see his book’s publication and subsequent massive success.

When Kalanithi was nearing the end of a grueling residency in brain surgery, he began experiencing crippling back pain and drastic weight loss, and he eventually received the diagnosis of stage IV lung cancer.   The early stages of When Breath Becomes Air were introduced to readers through a piercing column Kalanithi wrote for the New York Times about coming to terms with his diagnosis.  In both the article and the book, he asks lyrical questions and makes challenging observations about his trajectory as a gifted student choosing between pursuing a master’s in English literature (he was accepted at Stanford) and medical school (also at Stanford), his demanding work as a surgical resident, and his ultimate role as a patient facing a terminal diagnosis.

There’s a degree of naive denial that most of us have the luxury to embrace throughout the bulk of our adult lives with respect to mortality.  Kalanithi’s terminal diagnosis shatters this luxury and forces the inevitability of death into what should have been a joyous chapter of celebration and achievement.  After years paying his dues and struggling with the extreme demands of a neurosurgical residency, Kalanithi and his wife (also a doctor) must instead plan for a complex course of cancer treatment, face difficult choices about whether to continue to operate and see patients, and whether to try to conceive a child before it’s too late.  Kalanithi writes with candor and clarity about death and infuses each page with raw honesty:

“I had started in this career, in part, to pursue death: to grasp it, uncloak it, and to see it eye-to-eye, unblinking.  Neurosurgery attracted me as much for its intertwining of brain and consciousness as for its intertwining of life and death.  I had thought that a life spent in the space between the two would grant me not merely a stage for compassionate action but an elevation of my own being: getting as far away from petty materialism, from self-important trivia, getting right there, to the heart of the matter, to truly life-and-death decisions and struggles…surely a kind of transcendence would be found there?”

Medicine is not a job, nor a career for Kalanithi.  His work is a calling and one pursed with agency and integrity.  Once Kalanithi becomes a patient and trades his medical scrubs for a hospital gown he comes full circle to grasp and appreciate what the best doctors are called to achieve:

“The physician’s duty is not to stave off death or return patients to their old lives, but to take into our arms a patient and family whose lives have disintegrated and work until they can stand back up and face, and make sense of, their own existence.”

Share on FacebookShare on TwitterShare on Linkedin
Posted in Books, Grief, Work & Career