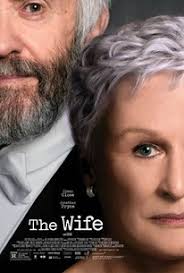 Bjorn Runge’s cinematic adaptation based on Meg Wolitzer’s popular best-selling novel, The Wife, opens with a cozy snapshot of marital intimacy. Celebrated author Joseph Castelman (Jonathan Pryce) and his down-to-earth wife Joan (Glenn Close) are comfortably situated in their bedroom when Joseph receives the much anticipated call informing him that he has been selected to receive the Nobel Prize for literature. Joseph is expecting the call about the prize, and he asks the caller to wait for his wife to pick up the line in another room so that they can hear the news simultaneously. The couple celebrates immediately by jumping on their bed while holding hands. But Joan exits the gleeful jumping pre-maturely, hinting at a mysterious wedge in the marriage.

As the Nobel Prize ceremonies unfold in Stockholm, the films storyline flashes back to the couples’ earlier years and the unconventional backstory to their union. The plot continues to toggle between the past and the present, and a complicated secret is revealed, explaining the initial source of Joan’s inner-turmoil.

The Wife paints a vibrant and compelling portrait of marital intimacy and the intricacies that unfold through the arch of a family life. From a psychological perspective, what this film does best is emphasize that family secrets rarely contain themselves and usually affect the nuclear family on conscious and unconscious levels. Children often intuit a secret and are influenced by the contrast between what is presented to them by the secret keepers and the truth that lies beneath.

What is confusing about the film is that it skims over the secret in a manner that under-emphasizes the possibility that couples might collaborate and compliment one another’s strengths. In order to avoid a spoiler review, suffice it to say that Joseph and Joan’s hidden family secret seems potentially exaggerated and confusing based on the details revealed. Nevertheless, this startling portrait of a complicated marriage and family life is engaging, provocative and memorable.