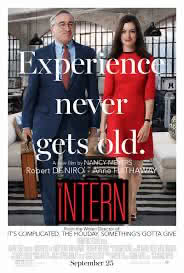 Women entrepreneurs and on-line shoppers alike can’t help but enjoy Anne Hathaway’s snappy, stylish performance as internet mogul Jules Ostin in Nancy Meyers’ 2015 film The Intern.  The film’s tag line — “experience never gets old” — is a tribute to the wisdom and elegance of Ostin’s unlikely intern Ben Whittaker (Robert DeNiro), a seventy year old retired widow who carries a briefcase, dresses in a suit and tie, and reads the paper version of the newspaper.  To underscore Ben’s anachronistic presence, his resume boasts of a stellar career in the phone book industry.   The bond that builds between Jules and Ben functions as the centerpiece of this engaging tale through which the intern has as much to teach as the mogul.  Interior aesthetics act as a virtual supporting cast as does wardrobe, enhancing to the film’s watchability.

But, as a therapist, what’s is most compelling and unusual about the film (SPOILER ALERT!) is its exploration of marital infidelity.  Popular culture is often blame-focused and judgmental on this complicated topic.  Most films about marital infidelity focus primarily on the breach of marital trust.  The philanderer is a villain, and the betrayed walks a moral highground.  Years of work with couples committed to their marriage and determined to work through issues related to infidelity demonstrates that infidelity is often more complicated and nuanced than Hollywood films and romance novels lead us to believe.  Infidelity can happen in a good marriage.  And loving partners sometimes stray.  This film highlights a lesser explored perspective: sometimes infidelity happens NOT because something is inherently wrong with a marriage, but because an individual within the marriage is struggling with who they have become.

The Intern has been understandably critiqued for the formulaic plot.  The portrayal of start-up culture and its inherent clash with old-school business norms plays out in an expected yet satisfying narrative.  But on the topic of infidelity, this film takes surprising risks and defies conventional wisdom.  If you or your partner have strayed and both parties are committed to salvaging the marriage, The Intern offers a novel, unexpected perspective that may prove therapeutic.