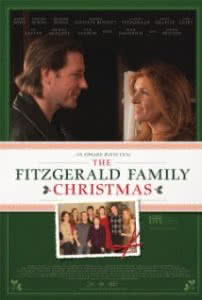 Navigating the holiday season with divorced parents is somewhat like walking a tightrope: at any moment one can plunge into dangerous territory, and it requires tremendous balance, skill and practice to avoid disaster.

People with divorced parents spend countless holidays practicing this precarious act.  Sadly, many continue to experience tremendous tension and anxiety related to the holidays and the logistical challenges associated with their parents’ divorce.

Few films explore the tensions, drama and heartbreak that the holiday season can bring to adult children of divorce with the depth or the intensity of The Fitzgerald Family Christmas.  Written and directed in 2012 by Edward Burns, the plot is simple.  Mr. Fitzgerald walked out on his wife and his seven children.  20 years later, he is dying of cancer and his final wish is to spend Christmas with his family.  The story is so basic that it risks becoming yet another cliche tale about how all children of divorce want is a family reunion.  However, this film is far from cliche.  Instead, the story elegantly highlights some complex truths about having divorced parents that are rarely explored in the popular culture.

Even for adults who know that their parents’ divorce was necessary, having divorced parents can be incredibly painful, especially around the holidays:

All seven of the Fitzgerald siblings articulate the pain they continue to carry associated with their family’s split.  At one point, the otherwise contained and composed middle child, Connie, screams:

“Now [my dad] wants my help because he wants to come home for Christmas.  And I’m like, you know what, I’ve been helping you since you walked out on us twenty years ago!  I mean I raised half of his kids.  I took care of my mother when she was losing her mind those first couple years and he’s off in Manhattan having a grand old time…And I didn’t want to do any of that… I did not ask for it, but I didn’t have a choice…Do you think he ever said thank you?  No!”

Next, older sibling, Erin, pleads with her mother who does not believe that her father is actually dying.  Their fraught conversation demonstrates the lasting painful reality of divorce:

“Why wouldn’t he tell anyone before this?…”

“Mom you know dad, he thought he’d beat it.”

“…If anyone deserved it it would be him, [and] there will be no tears shed for him from me.”

“The pain he’s dealing with now is insignificant to the pain he caused us.  What about me?  What about you?  Your childhood?  Those little ones not having a father in the house?  THAT is real pain.  Pain you carry with you for a lifetime.”

“So you’re going to cause more pain for all of us and not let him come over?”

“When he walked out on this family twenty years ago, I told him he would never set foot in my house again and I am sticking to it!”

This is the most striking aspect of the film.  The four older siblings are inclined to help grant their father his dying wish.  The younger three express little or no sympathy.  Clearly, the older siblings had more years with their father in their household and that bond has endured.  The younger three do not know their father as well, and his absenteeism has left permanent damage.  It is not fully clear whether his lack of involvement after the divorce was his own doing or something that Mrs. Fitzgerald insisted upon after the split.  Regardless, it is extremely clear that the older four children experienced a psychologically different childhood than their younger siblings.  In this mode, the film makes a strong case for shared parenting and continued involvement with both parents following divorce.

In a family meeting with their father, the older siblings are vastly more protective of their dying father and want to come up with a plan to spend Christmas together.  The younger siblings’ responses to the proposed plan reflect the stark contrast in their childhood experience:

Sharon: “Well, I just want to say that whatever you all decide, I will be having Christmas with Mom.”

In most divorces, one spouse wants the divorce and the other does not.  However, divorces are never black and white.  Children of divorce may struggle for years with their parents’ competing narratives:

Mr. Fitzgerald is clearly the villain in the case of the Fitzgerald divorce and it is easy to understand why several of his children and his former spouse want nothing to do with him.  However, he makes a stirring apology to his children that may resonate for many with divorced parents:

“She and I were young.  It’s never as black and white as it seems…We were kids when Gerry was born.  Neither one of us had an education.  We weren’t prepared to deal with life, and life just showed up.  And we had to do the best we could…and I apologize…I wasn’t there.”

If your parents are divorced and the holidays are causing you pressure and pain, consider downloading The Fitzgerald Family Christmas.  Many of our clients with divorced parents have found this film helpful.  Viewing the tale of the Fitzgeralds will not offer any answers to the complex questions raised by divorce, but their struggles can be both affirming and compelling.

The Fitzgerald Family Christmas is available on Netflix.