The Boys in the Boat

The Boys in the Boat 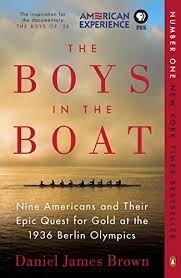 “Every good rowing coach, in his own way, imports to his men the kind of self-discipline required to achieve the ultimate from mind, heart, and body. Which is why most ex-oarsmen will tell you they learned more fundamentally important lessons in the racing shell than in the classroom.” George Yeoman Pocock

As a therapist in Washington, DC, I work with many prior athletes and am perpetually curious about the emotional and psychological background of athletic champions and how their story may inform their accomplishments.

Individuals respond to traumatic childhood experiences in different ways. Childhood abandonment is especially distressing and can make an individual vulnerable to many forms of ongoing distress, disturbance and destructive behaviors. Nevertheless, certain (remarkable) victims of neglect and abuse rise up and achieve the extraordinary. Freud might say that such triumphant individuals are sublimating – meaning that they are transforming unacceptable thoughts, feelings or urges, and turning them into something beautiful that benefits both the self and greater society.

Daniel James Brown’s outstanding book, The Boys in the Boat, is a number one New York Times bestseller celebrating the grit, fortitude and teamwork of the nine rowers who represented the United States in the 1936 Berlin Olympics. The story traces the unexpected trajectory of a group of working-class boys scraping their way through University of Washington; they surprise team after team of elite, privileged rowers and inspire a nation as they become arguably the greatest crew team of all-time.

Many have written about these boys and their stunning journey, but Brown’s book stands out in part because it originates through hours of in depth interviews with crew member Joe Rantz and with Joe’s daughter who cared for Joe during his final days. Readers learn that, as a boy, Joe was abandoned and abused by multiple family members. Brown details phases of Joe’s childhood where he lives alone, works to earn his room and board, and maintains a carriage of dignity and grit despite repeated abuse, neglect and disappointment.

Amazingly, Joe finds his way to the University of Washington and is noticed in the gym and encouraged to consider crew. Readers might imagine a magical upward path for this determined protagonist, but instead we route for Joe through a series of ups and downs all cushioned and contained through the backdrop of a beautiful love story between Joe and his supportive and determined girlfriend (whom he later marries) and also the backdrop of his complex and developing bonds with his coaches and teammates. In an especially moving moment, the team is traveling to a regatta early in their journey towards making rowing history, and Joe feels that he finally may have discovered a sense of belonging. He wears the same sweater every day because even more poor than his teammates, and he longs to fit in. In a moment of abandon, he breaks out his guitar and begins to sing. At first his teammates gather around, expecting familiar tunes. But when they discover Joe’s “camp tunes and cowboy songs” they begin to make fun of him, snickering and calling him “Cowboy Joe”:

Few things could have been more hurtful for Joe. His music was what had brightened the bleakest days of his boyhood. It had drawn people to him in high school, made him friends, and even helped him eke out a living in Sequim. It was his special talent, a particular point of pride. Now, suddenly and unexpectedly, it had turned on him, reminding him of how short he fell in matters of sophistication. Just when he had begun to feel that he was becoming a part of something larger than himself, he was cast out again.

Nevertheless, Joe perseveres. In a team of underdogs, he is the ultimate underling. The Boys in the Boat is most known for its captivating ability to recreate the surprising tale of one of the greatest sporting upsets in history and place it in the context of Hitler’s rise to power. The book is also heralded as a blueprint celebrating teamwork. Readers are ensconced in complex strategies that elevate the individuals in the boat into something much greater than their individual selves. Each chapter is interspersed with inspiring quotations – mostly from the infamous shell-maker and trainer George Yeoman Pocock:

“Good thoughts have much to do with good rowing. It isn’t enough for the muscles of a crew to work in unison; their hearts and minds must also be as one.”

Equally memorable is the book’s ability to celebrate a young boy’s remarkable ability to use the pain and rejection from his past to motivate and cultivate his ability to love, contribute and discover a sense of belonging with his team and his family and himself.