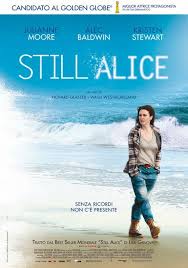 When a parent falls ill, the family constellation is bound to change, and multiple familial relationships usually become strained or strengthened, sometimes in unexpected ways.   Most people decide to begin therapy because something has changed, and usually this change involves a family or relationship crisis.  Since most of the clients in our therapy practice are in their 20s, 30s or 40s, a parents’ diagnosis of a major life-threatening illness is one of the difficult life events that can trigger the decision to reach out to a therapist.

Well deserved awards, praise and attention have been given to the intense and engaging film Still Alice (December, 2014, DVD release May, 2015) which tracks a family through the rare diagnosis of familial early onset Alzheimer’s disease.   Julianne Moore won the Academy Award for best actress for her portrayal of the trailblazing, brilliant linguistics professor who, in a cruel twist of irony, begins losing her words.  Moore’s portrayal of Alice breaks open a window into the humiliating and debilitating disease of Alzheimer’s, and her stellar acting and its revelations with regard to this taboo topic will likely be the centerpiece for which this film is remembered.  However, equally interesting, at least to a therapist, is the film’s exploration of the family dynamics and how they dramatically shift as Alice’s disease progresses.

Alice has what looks like a picture perfect marriage.  The film opens with a dashing Alec Baldwin playing Alice’s husband, Dr. Howland, toasting his wife on her birthday as the “most beautiful and intelligent woman I have known in my entire life.”  Within the first few minutes of the film, it is clear that, of the three children, Lydia (Kristen Stewart) is the family pariah.  She lacks her parents’ and her two siblings’ academic credentials, she lives across the country, and her life as a starving, struggling actress is considered frivolous by all members of her family unit.  (The film’s emphasis on sibling dynamics is further intensified through Alice’s intense focus on the memories of her own sister who died in a car crash when she was young.  In the same opening conversation mocking Lydia, we see the first sign of Alice’s mental confusion when she oddly presumes that her son-in-law is asking Alice about her own history of sibling rivalry rather than asking his wife about her relationship with Lydia.)

The breadth and development of Lydia’s character and the complex dynamics that unfold between Lydia and her family through the progression of Alice’s disease enhance the film’s depth.  The precise elements of Lydia’s character that repel her mother and her siblings become the strengths most important to the family unit as a whole.  The family member viewed as the least competent proves to be the most resilient.  The very qualities that her family has historically devalued — her emotional curiosity and drive to explore and understand the human condition from a more heartfelt and less academic orientation — turn out to be Alice’s most potent medicine.

If a parent or loved one has been recently diagnosed with a chronic, life-threatening illness, this film and the depth and development of the sibling relationships could be both a resource and an inspiration.