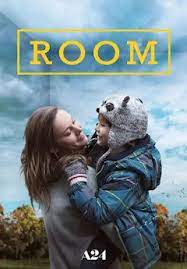 When my book club selected Emma Donoghue’s bestselling novel, Room, for our monthly read, I was not too psyched about revisiting this memorable, haunting tale. I saw the 2015 film in theaters and sat riveted through Brie Larson’s masterful performance which won her academy award for best actress in a lead role. Given the emotional impact of the film, I felt unmotivated to revisit the tale of five-year-old Jack and his mother (Ma) trapped in a tiny windowless space, held prisoner by the evil Old Nick while they plotted an unlikely escape.

I felt hesitant about returning to Jack’s fears when Old Nick would visit in the evenings and Jack was forced to hide in the closet (which doubled as his bedroom) and wonder why the bed kept banging against the wall and what Old Nick was doing on top of his mother. The horror of their ongoing captivity, the chill in the room when Old Nick did not pay the electric bill, the ongoing agony of Ma’s rotting teeth. These are some of the horrifying details I remembered. I was unsure about drudging up whatever details I had forgotten.

But Donoghue’s stunning novel captures the vivid corners of Jack’s inner emotional life much more deeply than the film. The book is told more completely from Jack’s earnest, innocent perspective. Jack may not like when Old Nick visits or seeing his mother despondent and comatose on the sporadic days when a paralyzing depression descends and immobilizes her. But Jack is content in their routine. He loves watching Dora the Explorer. He relishes trying to understand the difference between what exists inside the television and what exists outside in the world. He feels soothed by sensation of “having some” (his language for nursing) and his perspective remains mainly positive and satiated. Donohue manages to convey, through Jack’s descriptive perspective, the simultaneous experience of Ma’s ongoing trauma and her remarkable ability to shield Jack from her pain.

The bizarre and unimaginable circumstances of the plot set a stage that elegantly captures how profoundly young children form their world around their primary caregiving parent. Room is, at its core, a celebration of the immense power of unconditional love.

When Jack succeeds in Ma’s unlikely escape plan, the outside world causes a heartbreaking strain on their mother/child bond. After several years of captivity, they are finally freed! Jack is outside for the first time in his life, police are on the hunt for Old Nick, and all Jack wants to do is go back into the room and curl up in the only home he has ever known.

Once hospitalized for post traumatic medical, dental and mental health care, a well-intended therapist explains that his job is to help Jack recover from the trauma of living in the room and Jack thinks to himself:

“I don’t say because of manners, but he’s actually got it backwards. In Room I was safe and out here is scary.”

From a psychological perspective, the enclosed world of their room created a cocoon that met Jack’s primary needs for unconditional love and secure attachment. The room also delayed early developmental milestones of infant/mother separation and engagement with the external world. In this context, Jack’s believable and heartwarming headspace raises powerful insights about the bonds between mothers and children and how young children experience their world. The book is even more memorable than the film and I could read it all over again.