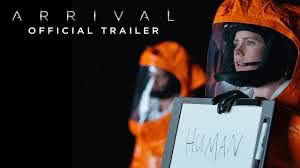 When individuals or couples initiate therapy, I ask that they begin by setting goals for themselves. Specifically, I ask them, what do you think you need to work on to have a more fulfilling life and more a satisfying relationship? The two most common goals — by far — are to improve communications skills and to build self-esteem. Not everyone uses those exact words. They might say “stop fearing conflict” or “learn fair fighting” or “take better care of myself”. But the psychological gist is the same.

Director Denis Villeneuve’s recently released science fiction thriller Arrival celebrates the dynamic relationship between communication and self-esteem. Louise (Amy Adams) is a linguist recruited by the military to work in collaboration with Ian (Jeremy Renner) a top physicist. A series of alien ships have landed throughout the world, and Louise and Ian are called on to guide the US military’s attempt to communicate with the aliens. The aliens — whom Louise and Ian affectionally name Abbott and Costello — communicate through a complex series of characters, and Louise’s willingness to trust and make herself vulnerable creates a safe space for the aliens to open up and communicate with the fluidity that is necessary to begin to decipher their language.

While Louise and her team begin to decode several of their symbols and sentences, the US Military and the world at large continue to distrust the intentions of the alien creatures and often tend toward paranoia in their interpretations. For example, the aliens say “tool” — the military hears “weapon”.

This interplay of meticulous linguistic efforts to communicate also functions as a metaphor for themes therapists working with couples come across each day, session after session. As couples engage in therapy, one half of the couple often expresses a wish that the other half of the couple will finally develop the underlying belief that their intentions are good. “Please know I always have your back,” they might say, or “Can’t you assume that I’m doing the best I can?” These are frequent pleas that surface behind the closed doors of intimate communications. Nevertheless, sometimes the slightest variations in what is said can unintentionally bring back difficult memories, or words come across as harsh when that’s not the conscious intention. In Arrival, the military allows historical baggage from past debacles to lead them to assume the worst about the aliens. The military’s paranoia is similar to how an individual’s painful family history or failed past romantic relationships can get in the way of an otherwise promising communication and potential union.

Like many therapists, I encourage couples (and individuals) to push themselves to communicate through “I statements”. In other words, don’t say “You are so cold, you never hug me.” Instead, say “I could really use a hug right now.” Framing communication in terms of “I” instead of “you” increases the likelihood that requests will be met and feelings will be heard in a productive way. But the technical choice of words is somewhat superficial. By communicating through the use of the word I, a person is owning their part in the relationship — and therefore developing and demonstrating a strong sense of self. The communication style matters, but what matters most is how we experience ourselves and how we experience our relationships. This is reflected by the emotionally mature use of language. Louise is strong but vulnerable — tough but eloquent — and her solid self identity inspires Ian and those around her to eventually meet her on an elevated emotional and communicative level. When therapy works, it works on a similar trajectory to the one demonstrated in Arrival. Those with a desire to improve their relational skills and strengthen themselves in the process can benefit from the provocative and psychologically sophisticated messages of this film.