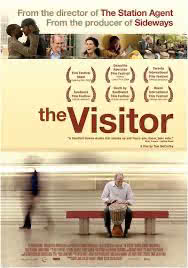 Grieving the loss of a spouse or immediate family member can involve an unpredictable journey. Researcher Elisabeth Kubler Ross categorized the expected stages of the grieving process — denial, anger, bargaining, depression, acceptance – but people move through these stages in their own way, and sometimes in an unexpected sequence.

One of the most common urges I notice with therapy clients who are grieving is a desire to feel close to their lost loved one. A friend once saved the change she found in her father’s coat pocket. A client placed his wife’s recently worn sweater in a zip-lock bag to hold her scent. A grieving wife slept in her husband’s pajamas.

Writer and director Tom McCarthy’s 2007 film, The Visitor, traces a college professor’s process of grieving his wife. The film demonstrates that opportunities for emotional growth can spring from the unexpected places and unconventional endeavors.

The film begins in Walter’s (Richard Jenkins) utterly quiet suburban home during his uninspiring piano lesson. The depressing session concludes when he fires his matronly piano teacher who promptly asks if she can buy his piano. Walter is a sorry excuse for an aspiring pianist. It turns out he is also falling short in his professorial duties.

Walter is forced to travel to his second home, an apartment in Manhattan, when his boss insists he deliver a paper at a conference in New York despite the fact that he did not assist with the paper’s development and formulation. His co-author ended up doing all of the work, but she is on bed rest, and Walter’s colleagues are tired to covering for him while he grieves.

Walter is surprised to enter his New York City apartment and find the lights on. He is shocked to open his bathroom door to find a beautiful young woman, Zainab (Danai Gurira), bathing in his tub. Suddenly, the woman’s furious boyfriend, Tarek (Haaz Sleiman), comes to Zainab’s defense. It becomes clear that a con artist has rented Walter’s apartment to the young immigrant couple, who have no idea they are squatting in Walter’s home. Awkward, dignified and lonely, Walter encourages them to continue to stay. The apartment feels full and vibrant, with the glorious rhythms of Tarek’s drum animating the space. Tarek has been playing since he was a boy, and he prefers to practice in his underwear.

Walter discovers that a drum circle in the park and lessons with Tarek are more therapeutic than piano lessons. We learn that Walter’s wife was a pianist, so the lessons represented Walter’s attempt to connect with his deceased wife. While piano lessons became an exercise in isolation and frustration, drumming in the downtown circle revitalizes Walter. He regains a kick in his step and vitality in his demeanor.

When Tarek is arrested and fears that he will be deported back to Syria, Tarek’s mother arrives and her grief about Tarek’s father becomes an important dimension of this engaging tale. The film does not offer formulaic or expected solutions. Instead, it honors the pain and heartache of loss, and the unfairness and complexity of life.

Share on FacebookShare on TwitterShare on Linkedin
Posted in Cinema Blog, Grief, Love