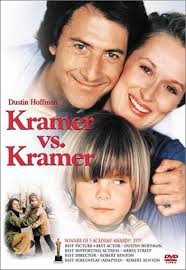 Considering divorce?  When relationship dynamics hit an all-time low, and life stressors hit an all-time high, divorce can start to feel like a possible solution.  Granted, many, many divorces are necessary.  Many divorces, however, can be avoided.  For some couples contemplating a split, viewing the 1979 Academy Award winning divorce classic, Kramer vs. Kramer could be helpful.

The film begins with Joanna (Meryl Streep) nervously informing her self-absorbed husband, Ted (Dustin Hoffman), that she is leaving.  She hands over the keys and the dry cleaning receipt and says she is taking only the two thousand dollars that she had in the bank when they married.  Startled, Ted grabs her suitcase as she turns and walks out the door; Joanna is so determined to proceed that she leaves her suitcase behind. Her last words to Ted as the elevator closes are: “I don’t love you anymore.”

At lot has changed since 1978: the curly phone cords,  wide ties, weird collars, and high pockets on jeans for example.  Despite the dramatic cultural shifts  that are obvious through this quintessential 70s film, the disheartening dynamics of a bitter divorce remain the same.  While the stated twenty eight and thirty one thousand dollar salaries  of these two Manhattanites and the stated legal fees of twelve thousand dollars each are quite different than they would be today, their proportion to each other demonstrates that divorce was as dramatically expensive then, as ever.  More importantly, the emotional pain that the divorce causes Joanna, Ted and their son, Billy, represents a snapshot of the pain that is typical in any divorce, whether in the 1970s or today.

What Kramer vs. Kramer does best is depict how when a person feels they absolutely must leave their marriage, it is often a reflection of how they feel about themselves.  In the heat of the moment, the urge to leave can feel like a reflection of the failings of one’s partner.  After all,  it is so much easier to see one’s partner than it is to see one’s self.  Time and space usually reveal that the urge to leave is about feeling unhappy with one’s self.  Ted Kramer begins the film as an exceptionally ego-centric character.  Joanna begins the film having lost all sense of herself.  Joanna explains this phenomenon  perfectly while in court on the witness stand:

“During the last five years of our marriage, I was becoming more and more unhappy — more and more troubled.  And I really needed somebody to help me.  But when I turned to Ted he just wasn’t there for me.  So we became more and more isolated from one another.  More and more separate.  He was very involved with his career.  And because of his attitude toward my fears and his inability to deal with my feelings, I had come to have almost no self esteem.  I was scared and I was very unhappy.  In my mind I no other choice but to leave.  At the time I left I felt that there was something terribly wrong with me, and that my son would be better off without me.  It was only after I got to California that I realized, after getting into therapy, that I wasn’t such a terrible person and just because I needed some kind of creative or emotional outlet other than my child, that didn’t make me unfit to be a mother.”

During their 15 month marital separation, Ted evolves into a devoted, hands-on, single father while Joanna resumes her career and develops a sense of self.  As their respective attorneys sink to surprising lows to fight their custody case, Ted and Joanna’s express shock with their lawyers’ brutality.  Their gentle glances, kind words and concern for each other represent that they have a relationship worth fighting for.  As the film progresses, what it unintentionally does best is depict a divorce that did not need to happen.  When two people care for each other to the extent that Joanna and Ted obviously do, and they share the fond memories of their early years of dating and marriage expressed throughout the story, it is often possible to restore and revive the marriage.  Considering how much the two of them grow and mature during the story, it seems obvious that they could work things out.  If you are struggling in your marriage and contemplating divorce, consider seeking the help of a trained therapist and watching this classic film.

Share on FacebookShare on TwitterShare on Linkedin
Posted in Depression, Divorce, Films