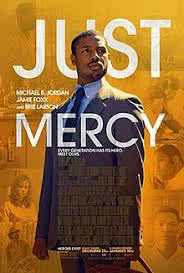 In 1987, Walter “Johnny D” McMillan was arrested in Alabama for a murder he did not commit. He was at a fish fry for several hours during the time of the murder, and several witnesses vouched for this alibi at the time of the initial investigation. Nevertheless, McMillan wound up on death row, slated for the electric chair. Fortunately for McMillan and his devoted family, Harvard-educated lawyer Bryan Stevenson moved to Monroeville months after the guilty verdict. Stevenson had turned down several more lucrative job offers to pursue a career in criminal justice reform. Stevenson’s work was more than a career — he seems called by a higher power to use his exceptional intellectual gifts to chip away at racial injustice. He is tireless in his mission to reform a racist system poised to thwart him at every turn.

Stevenson’s memoir, Just Mercy, was a best-seller that brought Walter McMillan’s story national attention. Director Destin Daniel Cretton adapted the book into a film of the same name that was released in January and is currently streaming on Amazon Prime. The timely release of this bravely acted, absorbing true story puts the film on a short list of accessible resources inviting reflection on the flaws in our criminal justice system.

Just Mercy does more than lay bare the need for criminal justice reform. It tells a story of family, community, friendship and love. It demonstrates that couples can and do recover from infidelity. This is hardly the point of the film, but as a couples therapist I find it a noteworthy detail explored from an unusual angle. It celebrates the value of professional integrity and demonstrates why pursuit of meaningful work is always fulfilling and sometimes an act of bravery.

Just Mercy is a true story that is as relevant as ever, and appropriate for family viewing with middle school and high school aged children.