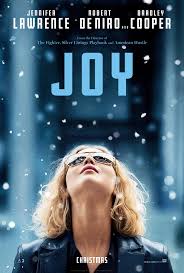 This is Russell’s third film pairing Bradley Cooper and Jennifer Lawrence and the combination is magical.   Jennifer Lawrence is so believable and endearing as Joy that viewers can easily overlook the underlying reality that she is too young for the part she is playing.  (The same was true in American Hustle.)  In fact, Russell changed Joy’s story — likely to fit Lawrence’s young age — and has her dropping out of college and meeting her uneducated musician husband at a party.  The real life Joy Mangano met her husband while they were both in college completing their educations.

Joy is an uplifting testament to female entrepreneurship, grit, and girl power.  Joy’s journey celebrates the pursuit of professional passion as a key to a fulfilling life.  Robert De Niro, Diane Ladd and Isabella Rossellini give memorable supporting performances.  Meanwhile, soap opera greats like Susan Lucci  play the soap opera stars of the show while Melissa Rivers gives a nostalgic performance as her mother, the late Joan Rivers.  So Russell uses these multiple cameos to emphasize the relatable elements of Joy’s challenges and her trajectory.

But what makes the film stand out is its emphasis on a beautiful and engaging single mother’s rise to the top of her field — while romance is not factored into the equation that defines her success.  The film does not over-analyze the break up of her marriage.  We are left to assume that her kind, loyal and reasonably supportive husband’s lack of ambition was not a realistic fit.  As a couples therapist, I could not help but wonder if their marriage would have worked today, now that it is much more socially acceptable for a woman to be the primary bread winner in a family.  Especially considering the extent to which Joy’s former husband remains a constant source of professional and personal support, both in the film and (apparently) in real life.  Regardless, the refreshing emphasis on Joy’s entrepreneurial gifts, strength and inner beauty and the noteworthy absence of the happily-ever-after romance that Hollywood usually necessitates for female leads is a welcome shift, especially for independent female viewers.

Share on FacebookShare on TwitterShare on Linkedin
Posted in Films, Work & Career