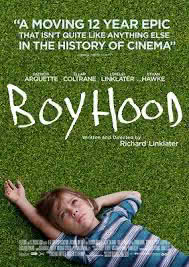 Writer and Director Richard Linklater’s unprecedented film Boyhood breaks new cinematic ground by employing an eleven year filming schedule beginning in May, 2002 and continuing through October, 2013. By filming for a few days each year, Linklater’s characters authentically age in concert with his storyline.  Many folks aware of this cinematic masterpiece admit that the media hype surrounding a movie publicized for following a boy’s life for eleven years led to reasonable assumptions that Boyhood was a documentary.  On the contrary,  Linklater presents fictional dramatic storytelling at its finest through this exceedingly realistic and engaging tale of a modern, gritty, loving allbeit unconventional American family.  Linklater understands that sometimes a person’s most unappealing flaws are what make them beautiful.

From a clinical perspective, what’s most interesting about Boyhood is the film’s ability to offer a believable, enlightening look at the emotional maturity process.  Olivia (Partricia Arquette) and Mason Sr. (Ethan Hawke) are already divorced when the film begins in 2002, and six-year-old Mason (Ellar Coltrane) and his older sister, Samantha ( Lorelei Linklater — the director’s real life daughter) are navigating life with a single mom and a father whom they rarely see.  The priceless scenes in Boyhood take place while Mason Sr. attempts to compensate for lost time and make authentic connections with his children.  Whether parenting while floundering in a bowling alley, chauffeuring the kids in his signature bad-boy car, swimming in a ravine, or listening to tunes in the balcony of an edgy Austin club, Mason Sr. personifies the absentee father desperate to make up for lost, irretrievable time.

Over the arc of the film, Mason Sr. improves his ability to relate with his kids and simultaneously matures on an emotional level.  He evolves from a father who pathetically makes excuses for the fact that he has not seen his young children in over a year, to a believable role model with a remarkable ability to extract genuine, relevant information from moody teenagers.  As Mason Sr. steps up in his second marriage, has a baby, gains steady employment and becomes a consistent figure in Mason and Samantha’s lives, Linklater demonstrates a dimension of human nature quite relevant in psychotherapy:  people rarely change, especially when someone else is trying to extract the transformation.  However, people do evolve, mature and grow.  As they do so, their ability to parent can help them to come through for their children when they are needed the most.

Parents in the process of divorcing may find tremendous inspiration though this hopeful and meaningful coming-of-age tale that proves loving families can take unexpected shapes and forms.