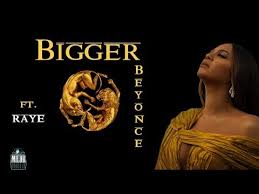 Understand the truth ’bout that question in your soul
Look up, don’t look down, then watch the answers unfold
Life is your birthright, they hid that in the fine print
Uh, take the pen and rewrite it
Step out your estimate
Step in your essence and know that you’re excellent
Rise (rise), the spirit is teachin’
Oh, I’m not just preachin’, I’m takin’ my own advice

If you feelin’ frustrated and (oh)
You’re sinkin’, I’m jumpin’ in (oh)
Forgiveness is key because we’re fightin’ something way bigger
You’ll never lose, we are winners

This song has become my daily meditation ever since I saw/heard/experienced it when Black is King was released on Disney+ at the end of July. Each day I found myself needing to hear this song: to let out an emotion, to find motivation, to find guidance.

One of the song’s writers, Raye, told us that she wrote it from “a very dark place” in an attempt to “empower” herself https://www.bbc.com/news/newsbeat-49065655. This was in an interview from just over a year ago surrounding the initial release of the song on Beyonce’s The Lion King: The Gift. I wonder what it is like for the artists who wrote this song to see this music re-released now within the context of a pandemic and a major social uprising. I wonder what it’s like to find the words, and beats, and music that poured out of their hearts at 3am bringing comfort and inspiration to so many around the world now.

You’re part of something way bigger

Every word of Bigger speaks to me at this moment as a therapist, as a human, and as an ancestor. I am trying to leave the world better than I came into it and better than the children I love came into it. This puts me on a mission to help break down barriers to unity and peace.

Life is your birthright, they hid that in the fine print

As a white person, it may be important to note that I need to hear this song a bit differently from how artists of color mean it for themselves and other Black/Indigenous People of Color (BIPOC). I am mindful of how my BIPOC clients may appreciate this song a little differently than I do. Though many of the themes in the song are universal, this song was specifically dedicated to her son, and those who share his racial identity. How I step into my “excellence” may mean stepping back to listen and learn from the African voices and spirits amplified in Black is King. As I listen, watch, and celebrate African and African American artistry, I practice unlearning the reaction to compare, compete, and colonize/appropriate, the way white supremacy culture encourages us to do.

take the pen and rewrite it

If I’m feeling frustrated and sinking, I am not without guidance and support. In the past months, we’ve received an outpouring of initiatives, educational materials, and trainings about our history of white supremacy, and how to dismantle it once and for all.

A list of educational resources (and study plan!) by two young women of color:
https://justiceinjune.org

A list of mental health support resources for black people:
https://www.self.com/story/black-mental-health-resources
As I do this work with myself, my colleagues, and my clients, I ground myself in this song, which is truly a gift.